← Adding the Who, What, Why, When, Where & How To Site Nav
Refresh Your Mind With The LXD API →

Fairly Certain I Had a Brush With Catknappers

Wow, so I’m moved into the new place. One encounters interesting events in life and must move on. Lingering longer does no good, such as with the circumstances surrounding the disappearance of my cat after its escape in transfer to the car.

Sometimes we linger longer
Or a grieving starts to grow
Which needs a thorough sieving
Before we can let go.

So this is that thorough sieving of my thoughts. Ugh! I friggin’ hate this stuff. I brought it on with my own stupidity, not having 2 cat-carriers ready for my move and believing I could use the one for both of them. That was my first mistake. My 2nd mistake was really believing that I was under some deadline pressure to be out of that place early enough to unpack on the other side before it was too late. I had a queen-sized mattress on my car-roof and all the melting contents of my fridge in the car. So I felt an urgency.

Mistakes Are Made In Urgency 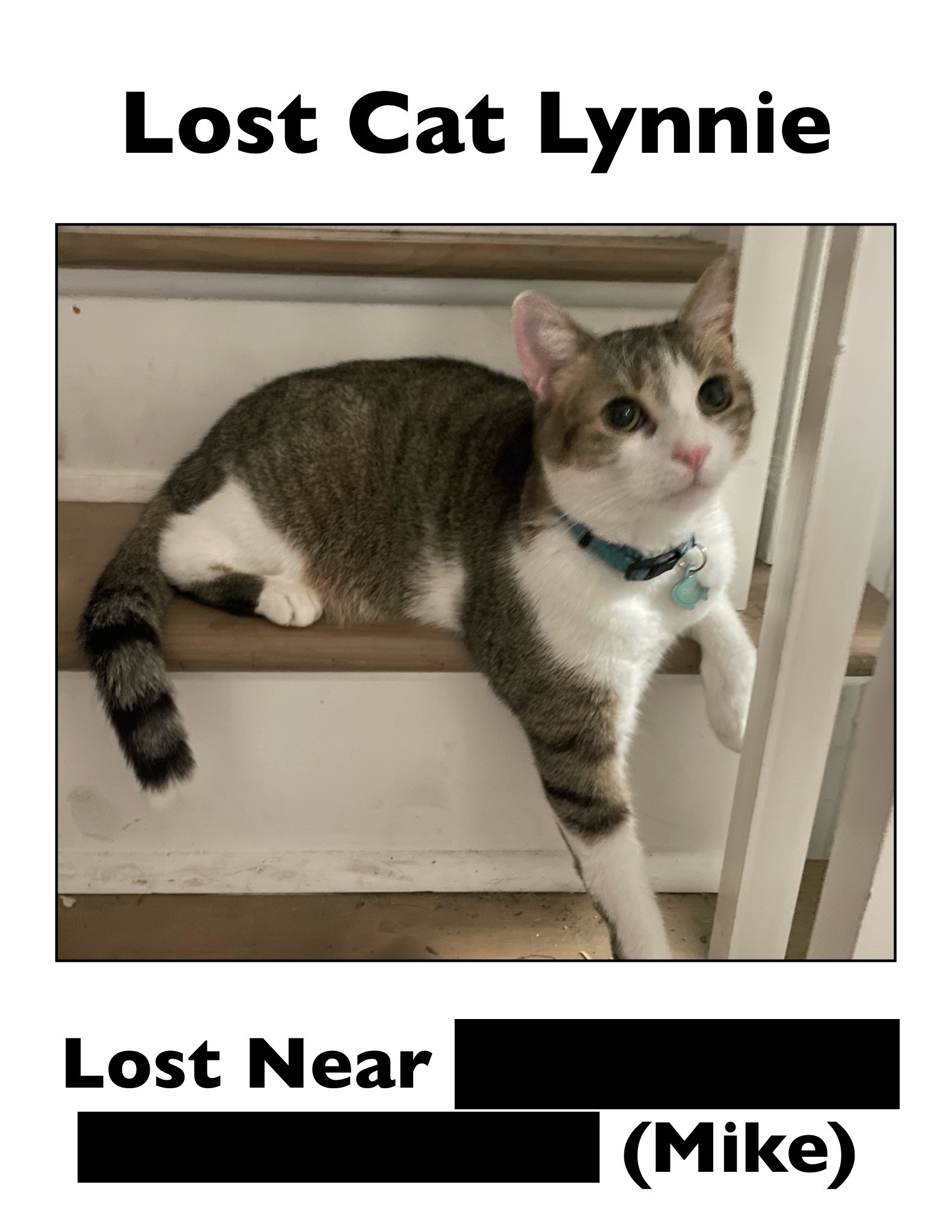 This was a mistake. I should have stayed another night and gotten a 2nd cat carrier at PetSmart in the morning, or found a cat carrier or some other container some other way. The cat got away. I definitely was stupid on that one, putting the wrong cat in the carrier and trying to transfer the more feisty one by hand. But I was overconfident in my ability to move one cat to a car without a carrier.

I spent a lot of time trying to get Lynnie before I left. I was torn. I almost unpacked the fridge again, but the electricity in the house was off by this time. There would have been no point in unpacking. The logical thing was to get my stuff to my new place an hour-and-a-half away, unpack (including getting that queen mattress up a flight of stairs) and come back later that night to retrieve Lynnie with the now-available cat carrier. I would leave the door open with cat treats inside to get Lynnie back in, and this is exactly what I did.

I Came Back That Night But Not Before Somebody Else Did

But when I came back that night I was sure I’d find her inside, but when I got back, the side-door was closed and the cat treats were broken up (by hand, they’re like a chocolate bar) and spread around. There were other things like the grilling under the deck pushed-in and the rake that I left in a different place. Someone clearly had been in the house.

This is a fact. In talks since, a few folks have insisted this is the way it is with cats. They will disappear for a few days and then reappear. But Lynnie has had her occasional outdoor adventures and has always stayed close and come back. She has well-established hiding places I could find her.

Someone being inside my place struck me as strange and creepy, but I didn’t think they had the actually caught my cat or there would have been some sort of note. Malicious intent was the last thing on my mind. It had to be my wife and her friend who weren’t accompanying me on the move but when I asked them, they said they had not been in the house. Spooky!

Spooked But Not Worried

And the cat had my contact info on the collar and I didn’t receive a call. The alternative that they did catch my cat and had no intention of contacting me was so unthinkable that I put it out of my mind. So I figured the cat escaped them too (though I see now I should have pursued this avenue more aggressively), and I came back the following night with no luck. Finally, on my third time back, I was convinced someone had my cat, and I started piecing it together.

I Apparently Had “Bad Karma” I Didn’t Know About

Earlier that week, a neighbor who I was comforting over their own things going on told me (or perhaps let it slip?) that I had bad karma in the neighborhood from rearranging part of a stone-wall on the property to better accommodate a tree-swing. I made the stone wall a few feet shorter as a safety precaution against smashing feet into it from a tree-swing I had put up in one of the few possible locations. This neighbor so much as told me that I was going to pay. I was quite taken aback, and I was like “Who”? And “Pay how?” I was met only with a strange “oh, you’ll find out” look.

What Would Have Happened If The Cat Didn’t Get Loose?

It was a strangely passionate warning, and my cat escaping clearly gave someone the opportunity they were looking for. I wonder what would have happened to the property if the cat incident wasn’t there. The damage they did to the grilling under the deck shows me they clearly don’t have an issue with property damage. Maybe there plan was to get me in trouble with the landlords somehow. Is this not over? Well, document, document, document!

I have pictures of every inside room and outside the house. If something changes between my having left the property and the landlords returning, I will be able to show the before-and-after.

So if it was one of the neighbors that this neighbor told me I had bad karma with, who could it be?

Oh, is it that perpetual Facebook-group bellyacher? There is this one person always posting grievances on the unofficial community Facebook page with the same first name as a reclusive mystery-neighbor that my drunk neighbor implied. Could they be one and the same? If so, I had a very powerful lever to try pulling.

I knew that if I posted the situation on Facebook drawing the attention of everybody who might know somebody close to me who wasn’t above catnapping, it’d ripple through the grapevine like lightning. So I wrote this post and 10 minutes later, Lynnie was back.

Let me repeat that. After 3 solid days of calling for Lynnie, shaking her treats, putting food out, setting up a humane-trap, checking under every patio deck and hidey-hole, and generally camping out and awaiting the return of a cat who never didn’t come immediately back before, she appeared 10 minutes after making this Facebook post. It was while I was on the street shaking treats and calling. I even think I saw her bolting back towards the house, but it was mostly in shadows and just the sound of a fast-moving animal.

When I got back to the house that I had re-opened the sliding-door to, Lynnie was in the house. And yes, I thoroughly checked the house several times over the prior days after hopeful door-opening sessions.

But there she was now suddenly, 10-minutes after the call-out. Coincidence? Maybe. But there were already comments on the post so I knew it was being read. I even scheduled an event for 9:30 AM the following morning to discuss who might have Lynnie, which I deleted along with the post after Lynnie showed up, because that place has enough drama without outing catnappers.

The loose-lipped neighbor called me back the next morning playing it off like it didn’t happen. My gaslighting detector was blaring like a siren. And then at 9:35 AM someone (a name I recognized) tried Facebook-calling me in connection with the cancelled Facebook event. I had the cat back and there was nothing to discuss. If someone wanted to tell me they had my cat and was waiting before they called the cellphone number that was on the collar until some such-and-such time, they can go eff themselves.

There’s not a lot of people who knew I was leaving at 9:30 PM June 30th and this was one of them. The sliding-glass door I left open for my cat was closed when I got back, period. My cat was gone for the next 2 nights. I might have wanted to not believe it, but I’m not a dumbass. Your drunk neighbor who I was trying to comfort in their tough times so much as told me. And if there was any doubt, the cat running back into the house 10 minutes after my publishing this confirmed it.