← When I Grew a Backbone, Story of The Samurai Mudskipper
Honestly, Fonzie →

In Defense of Flying Monkeys & Recrimination of Anti-Narc Community

I’m here to talk about a much maligned monkey moniker misnomer.

I have over the past several years become narcissism-aware having been accused of being one myself, researched it, opened my mind and made self-adjustments, jumped on the anti-narcissist bandwagon figuring the person who accused me of being one was clearly also one too because you know, projection, and then hopped off of that bandwagon again, because you know, functional and on the scale does not a disorder make.

As long as I can remember, I knew the Greek legend of Narcissus. Probably from those anthologies they make for children with the stories of Hercules, Prometheus and such. Hercules does tasks. Prometheus brings fire. And Narcissus stares at her reflection. The idea didn’t bust into my conciousness again until the Narcissa Malfoy character from Harry Potter which registered in my brain as a reference to narcissism. 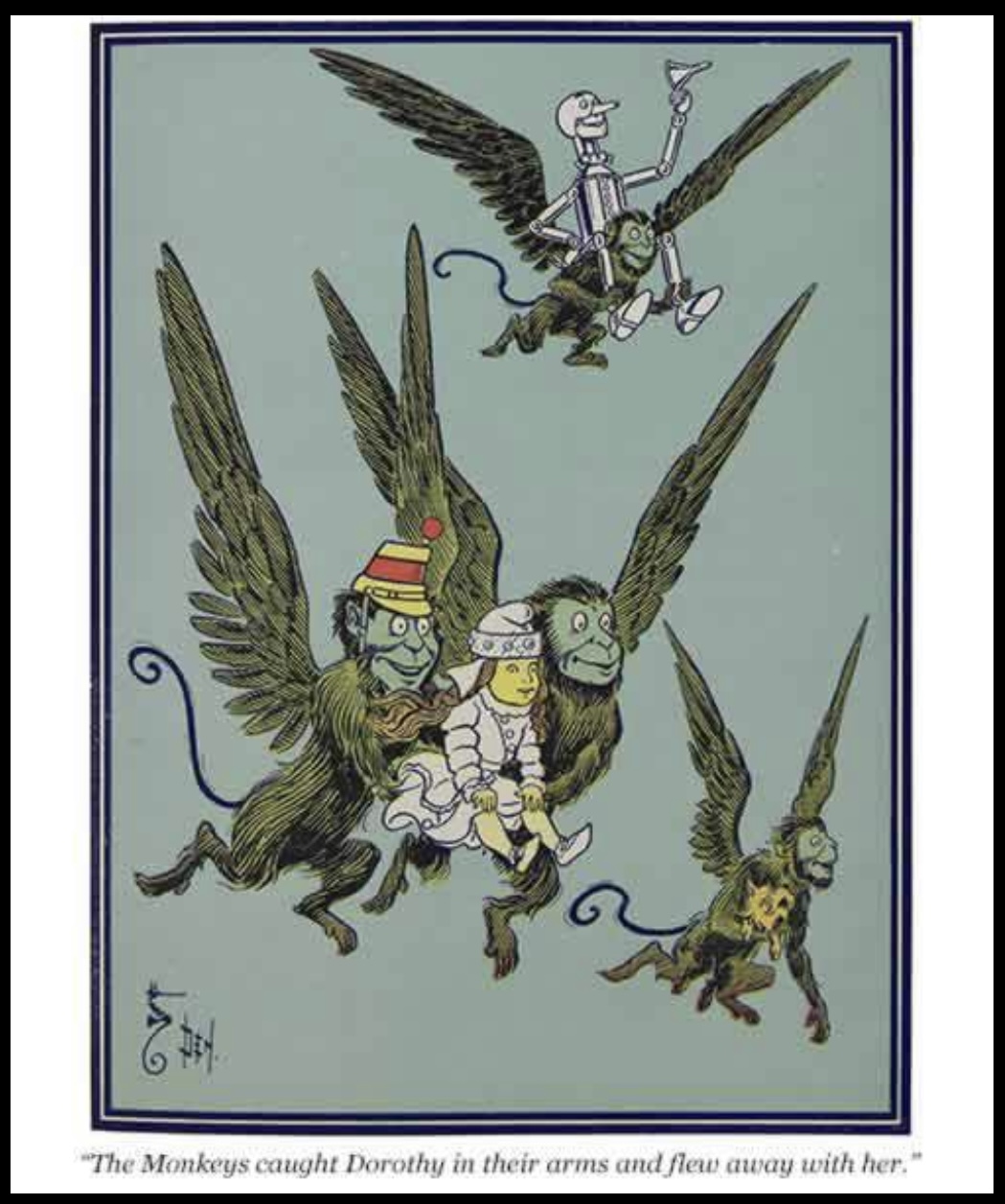 But little did I know what a huge online movement was brewing around this. Wow! I’ve grouped it in my head with borderline personalities which while profoundly annoying isn’t really a disorder until it effects people’s ability to live, or is destructive to the people around them. I held it to about the same standard as police use when taking a person in for a mental disorder. They have to be an immediate threat to themselves or the people around them (they basically have to attack the cop). In other words, most things aren’t a problem unless they’re really a problem.

Along with this probably goes my profound tolerance for situations that I think aren’t really that bad, or my hope that people will grow up and change as the neuroplasticity of their brains basically assures they can up until the day they die. It’s not the one-way loss of braincells obsolete research once made out. The idea that there’s some sort of “setting in stone” or hardening of the concrete or some such nonsense at age 21 and that’s why we’re adults then is complete and utter statistics. Statistics lie.

So what about this online narcissism movement. Is the world full of wicked witches and evil puppeteers out to turn you into narcissist supply soup at the expense of everything you love and know? Slowly driving you crazy and molding you into a self-object? Sometimes. But it not the norm. It’s adults acting like babies crying out for their food because they are incapable of feeding themselves and their mommies and daddies never taught them any better. I don’t think most people want to stay in that baby-state, and I think most people can learn better and grow up even later in life.

Two big points here. First, we’re all born narcissists and grow out of it, usually during that Alice in Wonderland / Dorothy in OZ / Harry at Hogwarts phase of our lives when we go on adventures, interact with a lot of different characters we weren’t exposed to in our sheltered lives so far, and have worldview-shattering and re-shaping experiences from our realizations. This is just life. New normals are especially the new normals around ages 6 to 12.

It’s the role of parents to ensure that these adventures take place. The doors of shelters must be flung open with faith that your kids aren’t so stupid that they run off the side of a cliff. Again, that’s dependent on how good of a job the parents did before the sheltered-life door-flinging-open. The life should not have been so sheltered, perhaps. This is about the only argument for public school over homeschooling. I’m in favor of some public school/homeschool hybrid. But that’s a story for another article.

And now we move onto the second point, regarding labels. Labels, labels everywhere and never stop to think. Labels make rapid, subtlety-free uninformed decisions too easy. Worse still, it gives them the power of group-think and the users of labels a license to a sort of righteous indignation isn’t merited. The popularity of the term “gaslighting” is maybe the worst. Did you ever think the person gaslighting has seen the mental decline and ruination of loved-ones over dementia, alzheimer’s or even schizophrenia? The person allegedly gaslighting just may actually know a thing or two and have your best interests in mind.

And that brings us to winged monkeys.

The flying winged monkeys from the Wizard of OZ are unfairly much maligned by the online anti-narcissism brigade, who without exception read strongly as raging narcissists to my eyes. These folks go by such Instagram names as myexisanarcissist and narcausecoaching. Without exception these folks are using you, the social media audience as their narcissistic supply. How can I tell? They publish what should be pics as videos because it drives up the apparent view-count on Instagram. Watching those numbers go up is such a narcissistic endeavor.

But back to those winged monkeys. The premise goes like this. Every outgoing and socially adept narcissist has their “flying monkey” buddies that validate, enable, and even egg-on the narc to evermore atrocious violations. It’s the idea of every bully having that weasley little punk-ass bully-buddy giggling and going “Heh, heh, yeah, beat ‘em up, beat ‘em up!”. They may even be able to be dispatched by the narcissist to do their bidding on their behalf, such as invalidating targets through commenting on posts to defend the bully and put down the target. They will even lie on behalf of the narc.

That’s the premise of the “flying monkey” so-called narc vocabulary anyway, which includes other such terms as grey stoning and gaslighting. I have found myself more and more helping a person clearly in need of guidance getting through their Alice/Dorothy/Harry adventures in life having to say “this is not gaslighting” so easy is to slap labels this-way and that, which while certainly having some truth to them, brush all the subtlety and nuance that separates gaslighting from sincere help under the carpet.

Not everyone that tells you that you may have a problem needing addressing is gaslighting you. They may deeply love you and be struggling to find a way to help you by which they’re not labeled and ostracised by a perhaps well-meaning but ultimately misguided online community. There’s even “doctors” out there who write books and make their money watching those YouTube views go up. Watch their faces very carefully during the videos. It almost looks like religious rapture barely being kept under control.

Few examples demonstrate how very wrong this community is on key points, such as the adoption of Wizard of Oz’s flying monkeys as the symbol to represent their attack-label. The winged monkeys of Oz are good and noble creatures. They are enslaved by a magic spell from a Golden Cap. Whoever owned it could call three times upon the Winged Moneys who would obey any order they were given. But no person could command these creatures more than three times. The movie took many artistic liberties with the real and much maligned story of the winged monkeys.

These creatures lived free in the great forest, minding their own business and only occasionally doing a little mischief as monkeys will. One day, the monkeys pulled a prank none-too-nice and angered a powerful and kind sorceress, Gayelette. Her grandfather was the king of the winged monkeys and pleaded they not be killed in retribution for the prank. Instead of killing them, Gayelette bound them to the service of this enchanted golden cap. Anyone possessing this cap could command the monkeys three times, at which time it became useless until someone new possessed it.

At this time of course the cap fell into the hands of The Wicked Witch of The West, Noel Langley, Mervyn LeRoy, Victor Fleming and a whole lot of others at MGM Studios you would probably describe as narcissists themselves according to the nattering naybobs of self-appointed narcspertise. And so the poor enslaved (and yes, a bit mean in their pranks) winged monkeys were recast as the willing agents of evil, the flying monkeys. And the flying monkey moniker stuck in the everyone’s-a-narc community.

I am surprised that not a single person online has taken offense at this (channeling my inner karen) and risen up in defense of these noble creatures. Has no one in the “let’s out the narc” brigade not read the actual book, The Wizard of Oz? I mean it’s such a wonderful book for children where the Tin Woodsman breaks the necks of hundreds of crows and chops wolves to pieces. It’s really a must in the same sense as original non-Americanized versions of the grim stories of the Brothers Grimm, and a lot of Aesop’s fables too.

Meaningful lessons are all in the subtlety and nuance. But such things don’t test well with the impatient, over-simplifying and quick-to label American audience. Let’s just wipe away all that detail and make the flying monkeys twitch and shriek in joy when the Wicked Witch issues her orders to capture Dorothy and fly them to her keep.

Now of course, projection, so I myself am probably guilty of everything I blame these narcissism-obsessed online communities of being. But I see this about myself and acknowledge how deeply flawed I myself am. New York City has been my Hogwarts from my mid-thirties to my mid-forties. OMG, I was bad. I was bad and I hitched up with someone just as bad who was kind enough to set me straight and get me back to my old dynamic self-doubting, self-improving self.

So don’t be so sure. Don’t be so quick to label. Don’t be so hasty assigning the worst attributes to people just because a stupid, poorly chosen, unresearched label makes it easy to do so. Stop and think. Maybe those winged monkeys have more going on in than a 2-hour movie can convey. There’s some deep channeling going on there and there are lessons concerning better living to be found. But more in the fourteen books that comprise the actual Wizard of Oz series.

Honestly, I’ve read all fourteen books and L. Frank Baum explores so many issues that are as relevant today as the day they were written, from transsexuality to computer application programming interfaces (APIs). Some might argue they are the same thing. Oh, did I mention machine learning and general artificial intelligence (GAI)? I mean this guy was spot-on, channeling better than Lewis Carroll ever did.

In fact, the fourteen books of the Wizard of Oz series are some of the deepest, most meaningful books I have ever read. They are not just for children. May I recommend that the anti-narcissism community read them all cover-to-cover before they go corrupting valuable concepts, throwing stones in their glass houses, calling the kettle black, and whatever other appropriate metaphors I can think of.

Defending flying monkeys is partially tongue-in-cheek. A useful label is still a good tool no matter how bad a misnomer. And really, maybe I just like saying much maligned monkey moniker misnomer. Peace, out my narcissistic but open-minded friends. If you reached this far, there’s hope.