Hello everyone! This video started out as an attempt to edit a YouTube livestream before it was ready and turned into Q&A with the audience who joins in as the workday begins. I guess that’s only logical and I let it continue because it really is so work-related. It covered a lot of topics of obsolescence resistance, vendor traps and LXD (Linux containers) under WSL2 (Windows Subsystem for Linux).

I had questions from about how I navigate around my notes and read them later. I showed my tag system and talked about how it’s not about re-reading, but it’s really about learning better in the first place like taking notes in class. The best way to learn is to teach, and this helps me teach myself. Over time, good ideas will emerge, get polished and be moved to other sites. But I don’t worry about that so much.

As far as a little bit of organizing as I go, I have my own CMS called Skite which lets me use one text file and lots of blog-like entries (in combination with vim macros) to blog (for life or per site or per topic).

All based on taking notes as a excellent way of learning.

Knowledge workers of the information age bring their minds and capabilities as their part of the deal. They have value because they pre-generated skills and abilities that the organization needs. We don’t work for ourselves because bringing it to an organization releases our value more efficiently than all the overhead of working for ourselves (employees, paperwork, marketing, taxes, etc.)

Python Pandas is the money maker… when coupled with OAuth2 savvy.

The cloud MUST BE OPTIONAL.

The new vendor dependency trap battle (i.e. slapping a leash on you) is taking place through proprietary application program interfaces… Cloud APIs… but also VSCode, no doubt. Who will learn vim or git when you have VSCode?

The answer is no one can escape VSCode. You just must manage the brainwashing.

And thus Microsoft dependency is assured.

Sqlite3… learn to use it for EVERYTHING locally. You at least have a cross-platform contingency plan for all things high performance-ish data. All Sqlite3 work can be adapted to the cloud for scaling, etc.

The Unix way… The Linux way. Google “The Unix Way”… and toolbox concepts.

Django and flask are are rare safe harbors. Their APIs change what? Every 10-years… maybe.

When flask embraced concurrency (async/await keywords), the API didn’t break. Compare that to FastAPI where pedeantic is a dependency as is Web-documentation publishing… very Microsoft.

Look for non-changing APIs in long-term tools. The Unix Way. Also appears in a lot of timeless-esque Python tools.

Technical liability & overhead… It’s what vendors hold over your head. It’s liable to be chopped off, leaving you with obsolete skills.

Use Python dict API… standard builtin data model like int, float… Python also has list, tuple & dict. Of these, the dict is a universal key/value pair API applicable everywhere and in everything… highly optimized, and can be “back-ended” by SQLite3, Redis, Amazon S3 or what-have you. But by using the standard API, your code will never break and you can change what back-end’s your key/value pairs for persistence.

This is a million-dollar trick.

Obsolessence resistance is key to me… but entirely at odds with the:

This is the world everyone will compel you into today:

I’m 51 years old and have been made obsolete by so many things that looked like sure bets, but there is no such thing, but Unix.

We’re all temporarily screwed by JavaScript’s dominance. But it will become much like SQL or RegEx. Who really loves SQL or RegEx, but they’re always present subsystems and resume keywords. So be it. JavaScript? Same thing. User Interface APIs. Concurrent (non-blocking) and always there. Thank goodness it wasn’t display PostScript (it could be worse).

Loosely couple a JavaScript API-layer with Python back-end server to deal with all today’s WebDeb “gotcha’s” (new framework every year) in a Pythonic way.

The work I’m putting off right now is the LXD work. It’s there. It’s working. It’s ready to go. It’s my new Linux playground under Windows.

I NEED LXD under WSL2… not having it is unthinkable. I think I have it working. I need to do Python Data Pipelining (like Luigi, but Huey). 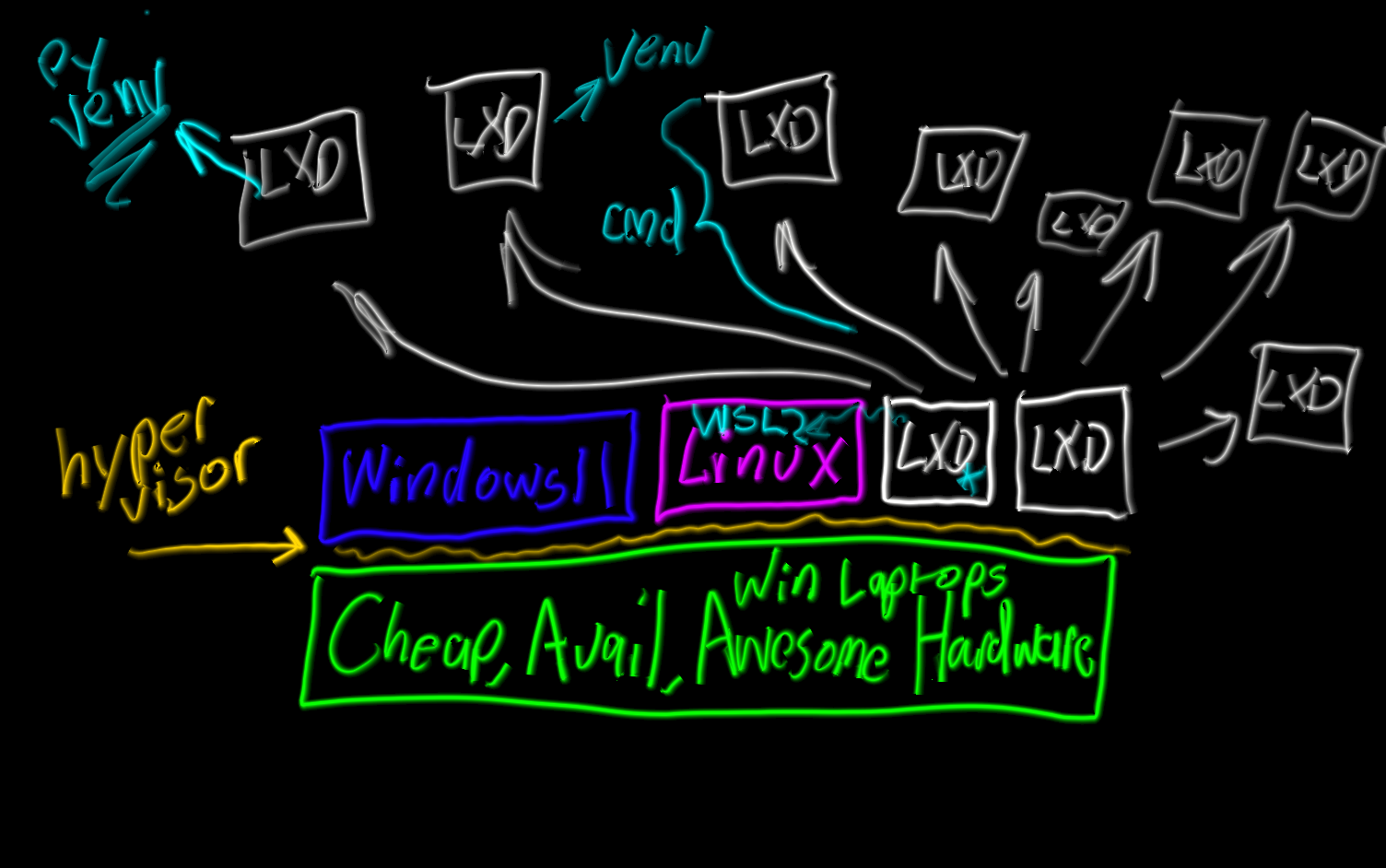 I talk about data getting, shape-changing & putting.

Key to that is the Linux tools.

Key to that is playing around with various tools under Linux with FUBAR’ing my main Linux “host” and keeping it on my laptop (not cloud).

All my pain is because Windows Laptops are cheap, cool & very well supported from drivers to repairs… it’s offering WSL which appears good enough… especially if supporting LXD… which is the REAL Linux playground…

I need virtualenv aka venv as in Python but for Linux.

Once upon a time there was Unix script. Not good enough. So each “shell” had their own: BASH Script & Kornshell Script… problematic. No one likes, so then there was PERL. All Unix’s and Linux’s started shipping with PERL, thus the P of the original LAMP platform: Linux, Apachee, MySQL & PERL (PHP & Python)… plone/zope.

But PERL is overkill and underkill at the same time, so many flocked to Python and Python became the new PERL, but the GNU organization can’t have such dissonance in the GNU tool-set, so they replaced Unix Script with Guile. Guile could let you do away with Python if you just wanted obsolescence resistance in the basics.

SQL-like data manipulation with Python/Pandas is not the basics, though much could be accomplished with:

It is sooooo the Unix-way… however, Python (pip install, etc.) is too good to walk away from.

I am organizing them for you.

The greatest thanks will be to help me blow up on YouTube.

I am an SEO after all, and I’m experimenting with different factors, and comments on videos seem to me like one of the most important.

So if you think you’re onto something here, at least give me a hello on comments.

I really appreciate it.

And now back to our regularly scheduled workday.

I know I’m different, but I’m just using the tools Microsoft is including for themselves to not be rendered obsolete. Hilarious turnaround, is not?

But by giving the doorway to the world of Linux, they are also installing vendor-dependency traps like: Azure dropdown from Terminal and VSCode to keep you from working in LXD under WSL2 and from vim.

But each has an ~8GB footprint. LXD footprints are much tinier. So it’s about hard drive space on a laptop (anti-cloud methodology is keeping your “virtual Linuxes” light and small).

There’s always alternatives… VirtualBox was once one, then it got bought by Oracle… just like MySQL. So paths to lightweight that don’t get gobbled up or otherwise ruined by vendors are rare gifts, vendors don’t want you forming habits around.

LXD is one. vim. vim plus LXD is Microsoft’s nightmare.

It’s not conspiracy that systemd isn’t active on WSL by default, but it certainly doesn’t hurt Microsoft’s cause.

systemd is just general Linux system automation that serves as an alternative to many other vendor tech’s.

Think about why they named it WSL instead of LSW

Linux must always be subordinate. Anything showing you Linux can run the show is bad.

LXD is on its way to being like the kernel virtual machine (kvm) which is hypervisor for Linux, built-into the Kernel and part of the official Linux. It’ won’t docker. Docker’s too strange. LXD works just like KVM but containers.

← There's No Place Like Home & You Get To Decide Where That Is... Or Do You?
Fixing Jupyter Desktop Set Python Environment Error Message →