Today is the 30th anniversary of my father’s death, Charles Levin, June 8th, 1992. The Amiga computer died. Dad died. Early signs of my mother going crazy were setting in, and my perpetually angry sister and her crazy friend Trava that she brought with her from California moved in on me, being in town for my graduation and suddenly with no signs of leaving. I had to take over my dad’s check cashing store, because ostensibly, it was all he had to leave my sister and me and as executor of the estate, I was legally bound to preserve the assets. 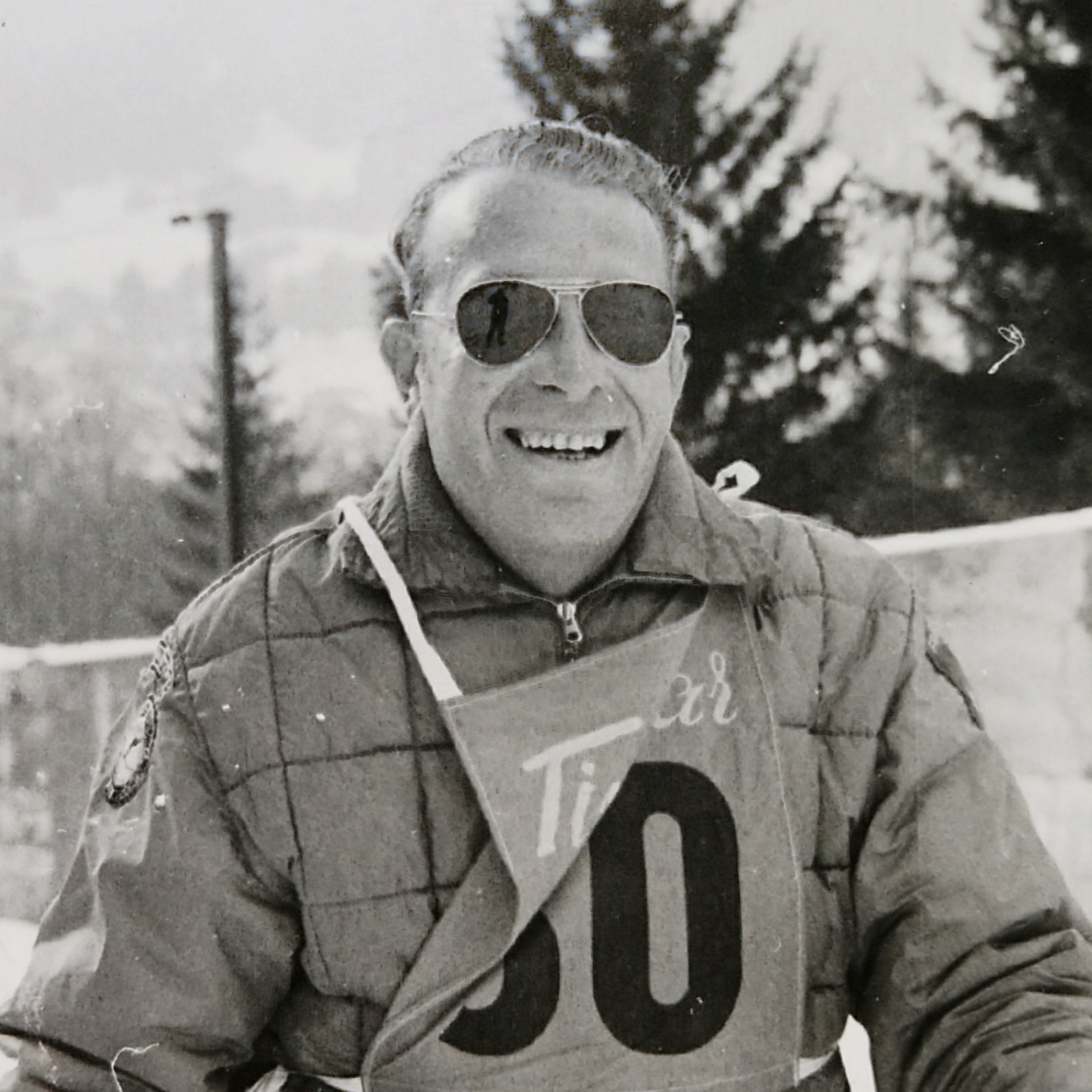 And in the course of running that check cashing store, a man tries to rob me and I shoot him four times with a gun I didn’t yet have a license to carry. I’m charged for a crime myself and quickly released, but my “career” coming out of college with stars in my eyes being the kid beamed up to the Commodore mother ship came crashing down around me. Meanwhile, a snot-nosed neighbor I had a childhood rivalry with shoots onto the Forbes 40 under 40 list. And why do I even care? The idea of being him is reprehensible. So what do I want? And why do I even write this?

Well, I write this because it’s been thirty years since Dad’s death, and it honors his memory for what it’s worth to remember him, and maybe does some good for me. I was twenty-one. I’m now fifty-one. Thirty-one and forty-one came in-between. Where was I then? Was I keeping a journal like now? Forget about what I would have done differently. What do I know now that I would have liked to have known then? What gifts can I give to my child based on the advantage of years and having experienced a thing or two?

Easy! Listen more closely to your own internal voice than to the voices of others, pop-culture, expectations of parents, or even your teachers, college professors, heroes or whoever. There’s a voice deep inside you that’s hard to hear, but it’s there. And be careful ‘cause there’s really a lot of different voices inside of you, and some belong to the worm, the fish, the frog, the lizard, the ferret, the poo-flinging primate, and then finally that most special and most meta of all, the ringmaster.

We all have a circus inside of us. The analogy to a 3-ring circus is good. There’s different acts like the lion-tamer, the high-diver, the tightrope walker, the trapeze, the elephants balancing on balls and all the rest. As I point out more and more, all the animal acts are actually quite inhumane and should maybe be retired like the Ringling Bros. and Barnum & Bailey Circus actually had to do. But for now, the image is still strong and can probably do you some good. We all need the Ringmaster in charge. The inner voice you should be listening to is the Ringmaster’s. The Ringmaster’s voice is the one that will eventually come out if you write regularly into a diary or a journal, like I am essentially doing right now.

Okay, so what does the Ringmaster say to me right now? The most important concept I have encountered in recent years is that of Ikigai. It is a Venn diagram of the intersection of: 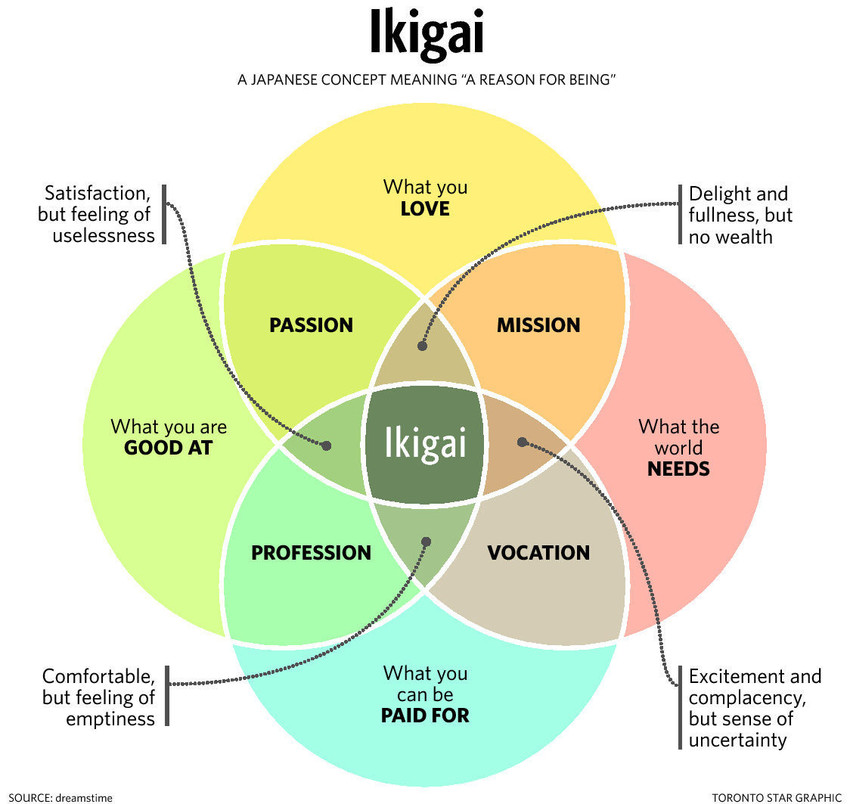 Is this a post about my dad’s death after 30 years or about other stuff I found along the way? It’s about honoring his memory, and whoever I am today is a result of many of the lessons that he knowingly and unknowingly instilled into me. I didn’t like to disappoint Dad. On the few times I did, it still resonates in my head like it was yesterday. He taught me about much I feel in this concept of Ikigai. He told me about his dreams and disappointments in life and how it was from listening to the bad advice of his uncles, Jews from the textile industry where a Jew could actually get jobs and stay employed.

You have to remember he comes from a time when IBM wouldn’t hire Jews. His dream of being going to Drexel and becoming an aeronautical engineer seemed unattainable. I went to Drexel. I started out in mechanical engineering with similar dreams of actually being one of the people helping to colonize our solar system. I think today I might have been happier with microbiology like that other Michael Levin working on epigenetic. Shaping who you are through force-of-will like Green Lantern being real is beyond all hope and imagining regarding the type of world we live in. Wow! How could anyone be a pessimist?

Everything relates to our journey here on this material world. My dad took his turn here. I’m taking my turn here. You’re taking your turn here. Doors are opened for others through having kids. My parents opened the door for me. Your parents opened the door for you. If you were to calculate the probability of your existence you’d see it’s rather unlikely and quite a gift. It doesn’t hurt to keep reminding yourself of that. It’s yet another reason for gratitude. Thanks Dad! Thanks for you being here and thanks for opening the door for me. Thanks to you too, Mom. I’ll give you your homage later.

So maybe we’re just emergent properties of evolution or maybe we’re spirits from other realm invited in by virtue of the “vibe” established by the process of sperm and egg combining in conception and a new unique code. That’s your most basic vibe and the “you” that you may be happy with, or may wish to override when you become meta at 9, 10, 11 or 12 years old. By the time you’re 13 or 14, you’ve done your first self-crafting, either intentionally or unintentionally. If you’ve done a good job and kept yourself open-minded and dynamic, you’re golden. If you’ve become close-minded, embittered and angry, you’re going to have a tough life full of blame and not a lot of control over your own destiny.

Human free-will is a thing. Or as the Green Lantern corps would point out, it’s actually sentient-life free-will that’s a thing. Lots of being-types can override the highest probability predetermined clockwork-universe type outcomes of things. If you were a betting God, that’s where things get interesting because that’s where things become surprising. How boring it must be to God, knowing all that ever was and ever will be. The past is the future and the future is the past and all that exists exists like a crystalline sculpture to pick up and examine as a piece of art, but where’s the surprise? Where’s the excitement of creation?

Surprise God. Make your life a life worth tuning-in and paying attention to. Don’t do what your uncles tell you to do because of their view of the world. Observe for yourself. Have confidence in your ability to help shape and change the world right as you engage in it. Observe patterns and step into the path of love-worthy things. Do what you love. Do what you’re good at, although that may take a bit of time to accomplish. Do what you can get paid for. And ultimately, try to align it to what the world needs.

My dad knew the world needed aeronautical engineers. Who from his generation didn’t know that (the space race). But whereas my dad allowed his dream to be crushed, got into a bad marriage, and only barely transmitted to me his love of things before he clocked out way too early (63 years old), find your love earlier. I’m fifty-one years old. I’m only twelve years younger than my dad was before he died. I do not think I only have twelve years left. I have so much to live for, and I won’t let the circumstances of my life crush me like it crushed him. No, I’m going to love what I do going into these later years.

I am not a check-casher. Thank you Dad for teaching me that when I was only twenty-one. I can imagine that would have been a lesson for me to learn in my fifties and sixties like it was you.