← Remain Positive & Know Signs Of When You're Doing Something Right
Say The Magic Words: Open Terminal! →

Okay, so I produced what I think could be a break-out video for the whole wsl –install thing. Technically, it will be the first of a series that gets to all my best Unix/Linux tricks. Tricks… tricks… ugh!

Let’s Look at My YouTube Analytics. Is It All Still Finger Magic?

Yes, most of my YouTube search and suggest traffic comes from finger magic and hand magic. Long ago the Raspberry Pi traffic faded away, certainly replaced by all the competition that jumped on the bandwagon since. But my finger-magic has continued in steady recurring spikes. The public has spoken: 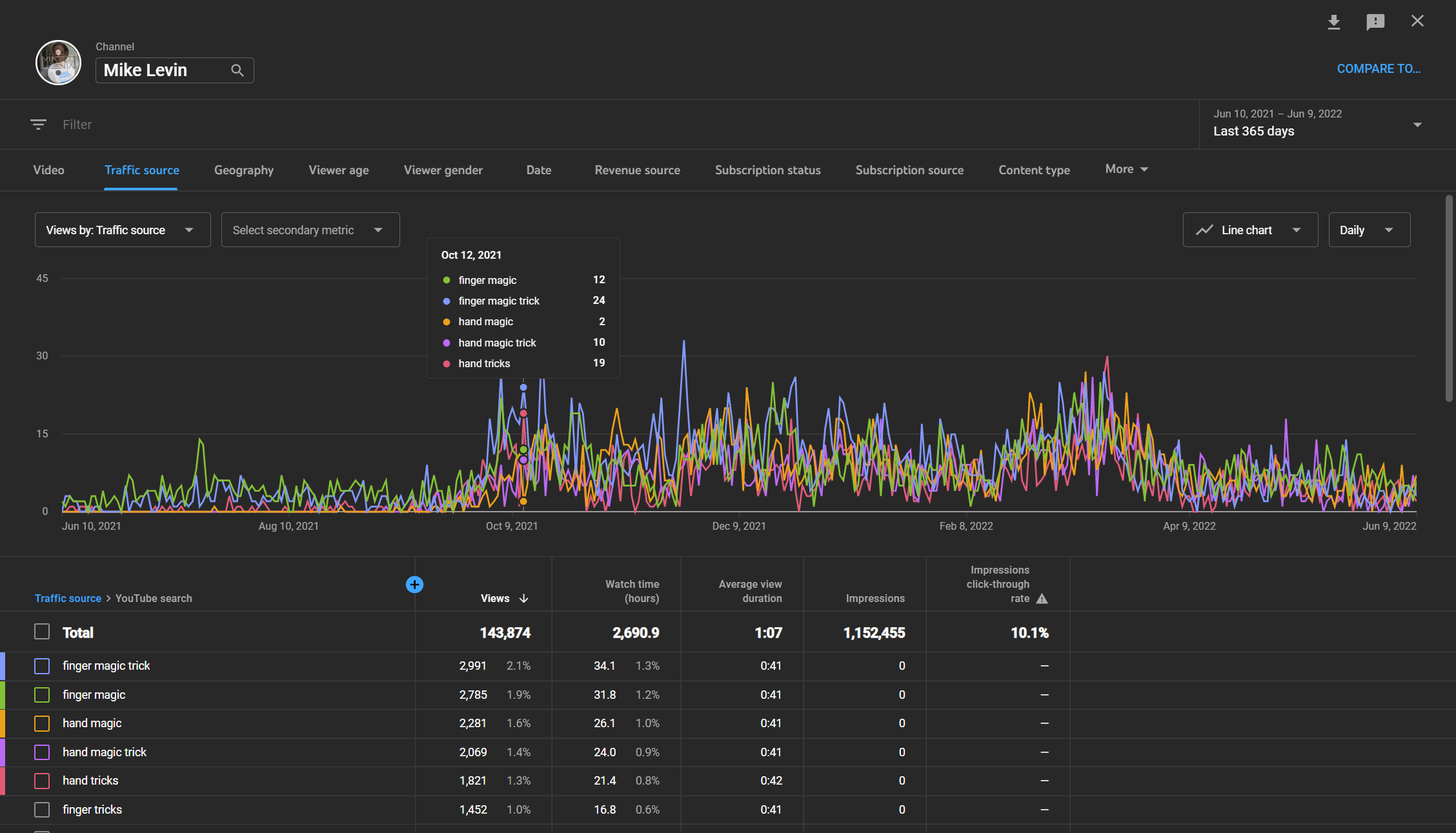 There’s something appealing to both people and the YouTube algorithm about that quick little off-the-cuff video I shot to capture one of my all time favorite tricks. Perhaps it was because it was accompanied by a very human story of my mailman growing up who taught me that trick and had a tremendous impact on me for life.

I didn’t learn the trick easily. I think part of why it stuck is that I would wait for that mailman to come around again to see how I was doing and to give me tips and pointers each day. I had a one of those precious and innocent adult-child relationships with him that would be suspicious and frowned upon in today’s world. What is that mailman doing? Stay away from my child!

I love The Shaggy Man from The Wizard of Oz series. Even back then such a character had to carry a “Love Magnet” for his relationships with people, including children such as Dorothy, to be believable. One of the more sweet moments in the Oz series is when The Shaggy Man gave up his Love Magnet to Ozma, the ruler of Oz, in order to live in the Emerald City and ended up still being unilaterally loved by all his friends still anyway.

They need that mailman in their life.

I will be Mr. Sucro to a new generation.

Then I will move you along to the magic of adulting.

I will move you along to the magic of lifetime expertise in things more valuable than school or money.

I will teach you the tricks of future-proofing your skills, resisting obsolescence in your expertise and becoming immune to disruptions to technology, the economy and society.

Unix/Linux won and nobody really gets it.

I really need to settle on the way to refer to them together. *nix makes the most sense, but then you have both the markdown and the upper-case ambiguity problem. But seeing nothing better, *nix it is.

I’ve got domains. Use LPvg.org. Make some sort of introduction or elevator pitch.

The pied piper of vim?

That’s what the YouTube algorithms are rewarding me for and likely want to see more of from me. Bring them in with the hunger for magic.

So you’re hungry for magic, my child? YouTube tells me you probably are not a child. You are the same age I was when I was trying to transition from old childhood magic-hobbies to more powerful adult magic. My YouTube analytics tells me that the seekers of finger and hand magic lean surprisingly older than I would have thought. The peeks are from 25 to 44 years old with a decent amount of 18 to 24 with surprisingly few of the youngsters I’d have imagined. This may be a data-skewing issue, but it’s fair to assume it’s bored adults looking for neat attention-grabbing tricks whom I’m attracting. 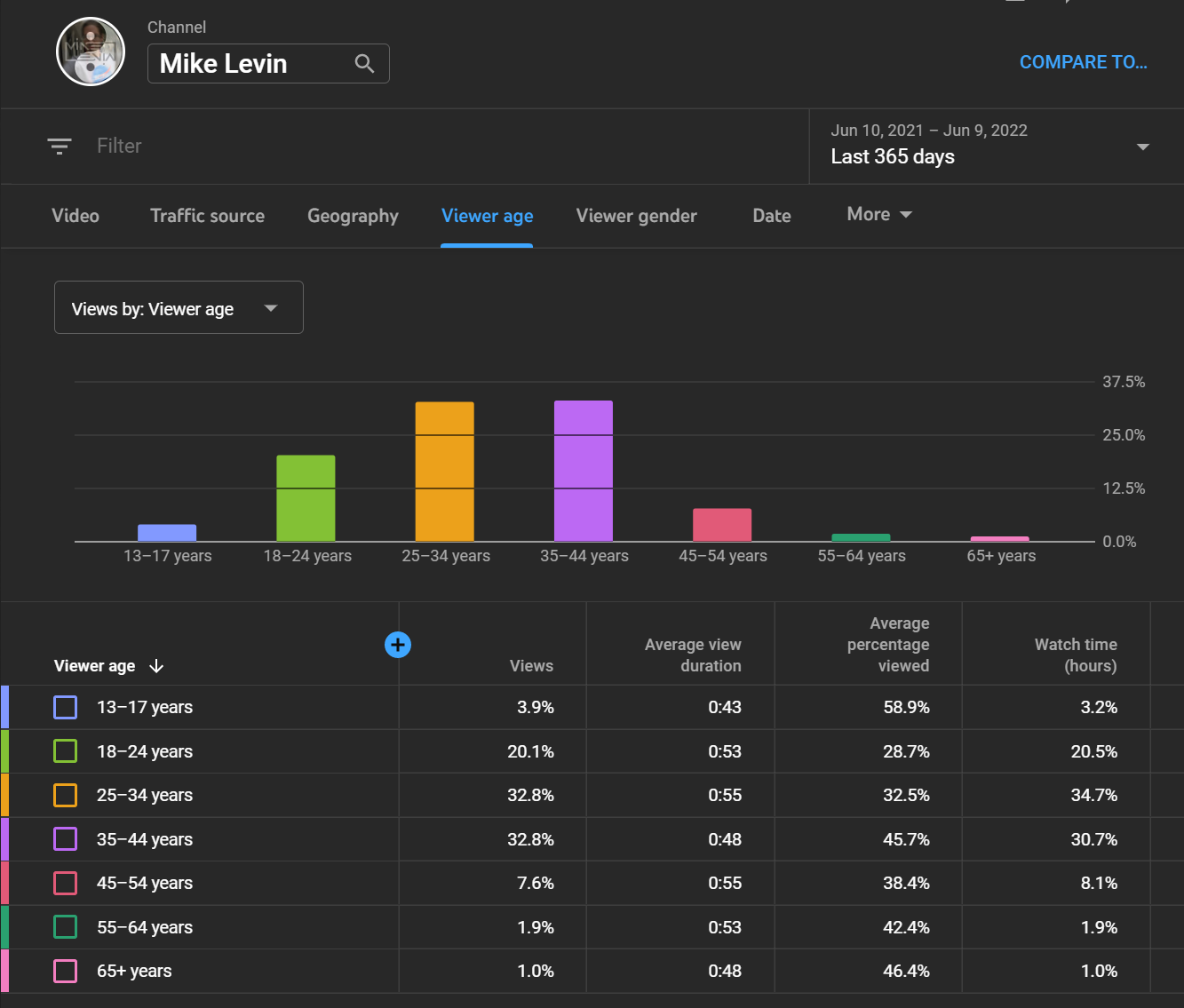 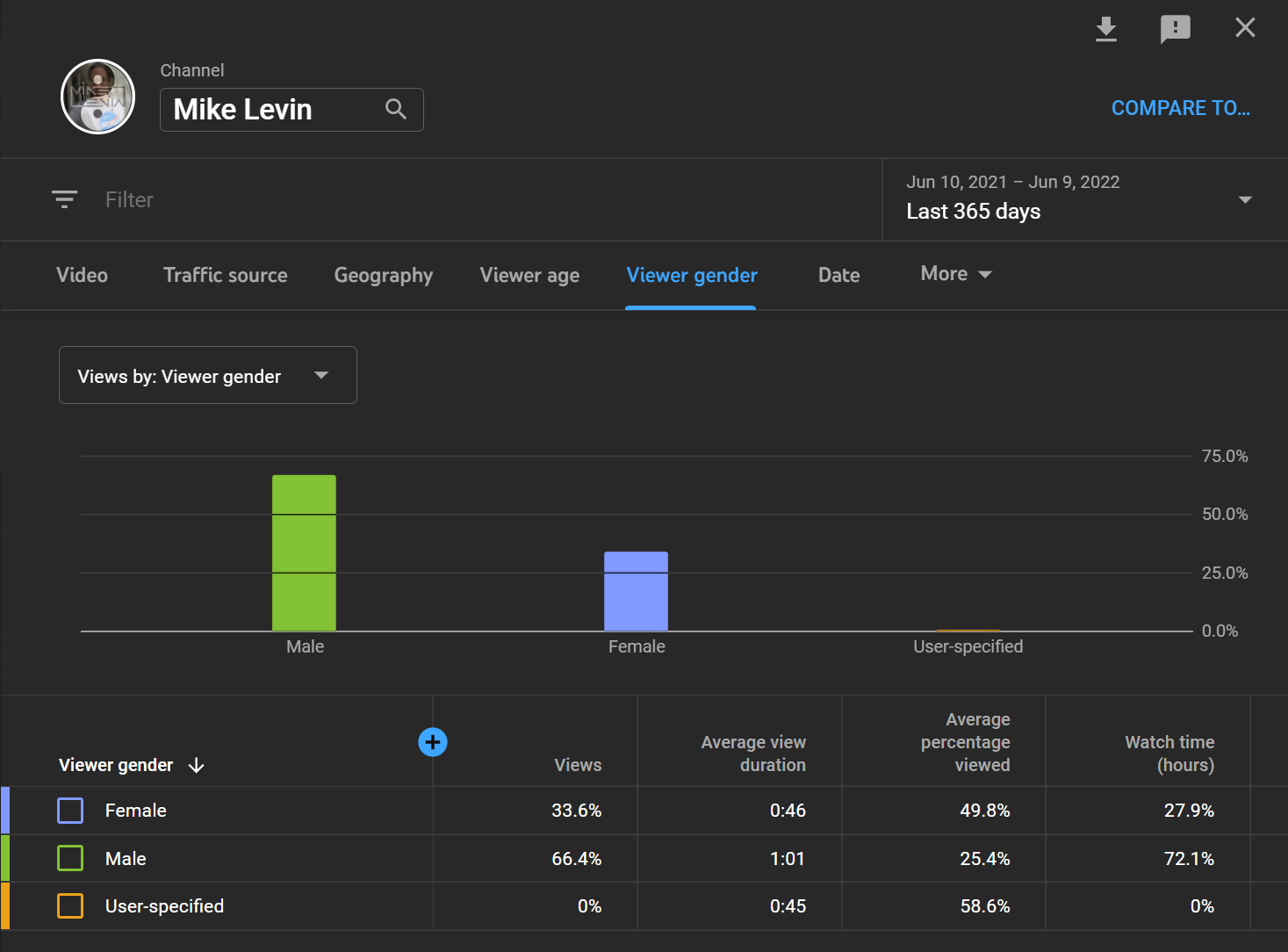 Oh, will you look at that! A full third of you are female. A large portion of you must be 25 to 44… not the demo I thought I had. Well it just goes to show you. I’m going to assume that people on the web searching for finger and hand magic are trying to entertain someone, and therefore have the performance bug.

Well, old fashioned magic ticks was a part of my past, just like comic books, Dungeons & Dragons, Magic The Gathering and a whole bunch of other interests I outgrew. But that’s because the hunger I was satisfying with these things I satisfy with other things that serve me much better in life. The myth building of those interest though helped, though I would credit the Science Fiction book reading perhaps more than these other interests.

More Venn diagrams, methinks. I can make it work. Be a pied piper of a new generation. Of course.

Be of interest to my own child, and probably even my own wife for that matter, by making it clear that what I have to offer is of great value to the population at large. Allow them to be curious about what’s going on.