Growing a backbone, I am. (in the voice of Yoda).

Joke: Two Pigeonholed Millennials Were Standing In An Elevator…

Life is one giant integrated thing—at least that’s my belief. How is everyone and everything not interconnected? I mean come on, how could anyone believe in the disjointed disunion of things anymore? But they do. Example case in point, hen I was standing on an elevator in Manhattan for one of marketing agency jobs, I forget which, I heard one of the flocking millennials say in a contemptuous tone to a co-millennial:

[Such-and-such person] views life as one big integrated thing with no separation between work and personal. Can you believe that?

“Yes! Yes, I can,” I thought silently to myself:

Who are these pishers to pigeon-hole a soul into you-are-this here but you-are-that there? Didn’t the failed Voldemort horcrux slice-and-dicing of the soul story from Harry Potter teach you anything?

Ugh, but I kept my mouth shut of course. I am not these pishers’ parents. If their mommies and daddies didn’t teach them to do what you love and love what you do then it is not up to me. What their parents should have taught them was that if you love what you do, you will never work a day in your life.

If for no other reason, don’t split yourself down the middle so that you don’t have to spend energy keeping your act up. Experiences from one area in life being able to connect to experiences from other areas in life is part of having realizations, knowing yourself and growth. Don’t deny yourself that with little firewalls in your being. But if you have, I guess You make your own bed, so sleep in it.

Speaking Of Beds And Things You Spend A Lot Of Time In:

What else is like a bed that once you “make” you have to sleep in?

These are seemingly small things that have a profound impact on your life. They are given too little thought.

You live in these things. You live in more than these things than anything else in life, and if you’re not a tech person like me you can probably replace the keyboards and text editors with whatever the tools of your trade are. You do have a trade, right? A craft you can feel good about having mastered? Something of value that you can trade for economic power without having to rely on handouts and the charity of others, right?

No? Well that’s a problem because it’s closely tied to self-image. And no I’m not saying:

A Man Is What A Man Does

But rather, we are of the material world and how you weave matter into the stuff of life matters.

(…in the voice of Madonna)

Most of us drive, right? Or maybe you hope to some day. If nothing else, being a driver is an easy way to turn everyday skills attainable to anyone into economic product. Driving once was a privilege of the rich like books and literacy. But just like books and literacy, driving is now one of the great easily obtainable options of the “in-need”. Driving is just like literacy. You’re not born with it, but you have to work for it.

Like Dune’s Pain Box, Driving Is A Test Of Your Human-ness

The real modern pandemic of anxiety is the actual blocker to driving. You have to overcome crippling anxiety to drive. Like the gom jabbar test of the Bene Gesserit, the ability to learn to drive is what separates those who are fit to lead (real humans) from those who are not (lower animals). Losing control of yourself while driving is simply not an option and some people are unwilling or unable to overcome that. So just like how reading for pleasure opens doors for you in life by allowing you to run the vicarious experience of others in your head without the same risks they took in life to acquire those experiences, driving similarly helps evolve you into being human by giving you access to worlds previously unavailable.

Be Alert For Dystopian Futures

Join Me In Disbelief These Came From One Author

Not With A Bang But With Wimps

How can I communicate such depth of life-experience in one quick elevator pitch? That person you feel contemptuous of that views life as one big integrated thing is worlds-wiser than you, the upwardly mobile Manhattanite that T.S. Elliot addresses so succinctly in Hollow Men. Oh! Poets yes they can do a better job at expressing it than I. Let me be as humble as the narcissist I am accused of being.

I am an unpoetic dumbass.

I am 51 years old and greatly unaccomplished by the measures of the green-arrow yangs I covet. But so what? I do not have expectations on myself to be of the sort of greatest all-possible wizards that I covet. I am not them. I am not:

The Tools I Advocate:

Clever Thieves Are Heroes Too

Linux is the implementation you all know you have today because of Linus being so vocal… such a git… and such a strong personality.

On Windows 11 under a Powershell with admin rights:

See? These are the brilliant wizards. And there are tons of others not credited here who are not part of the Unix/C-programming language lineage that swept through the world, forever changing it like a DNA-reprogramming RNA virus. Think I’m the first one to think so? Nope! Google:

Credit where credit is due. 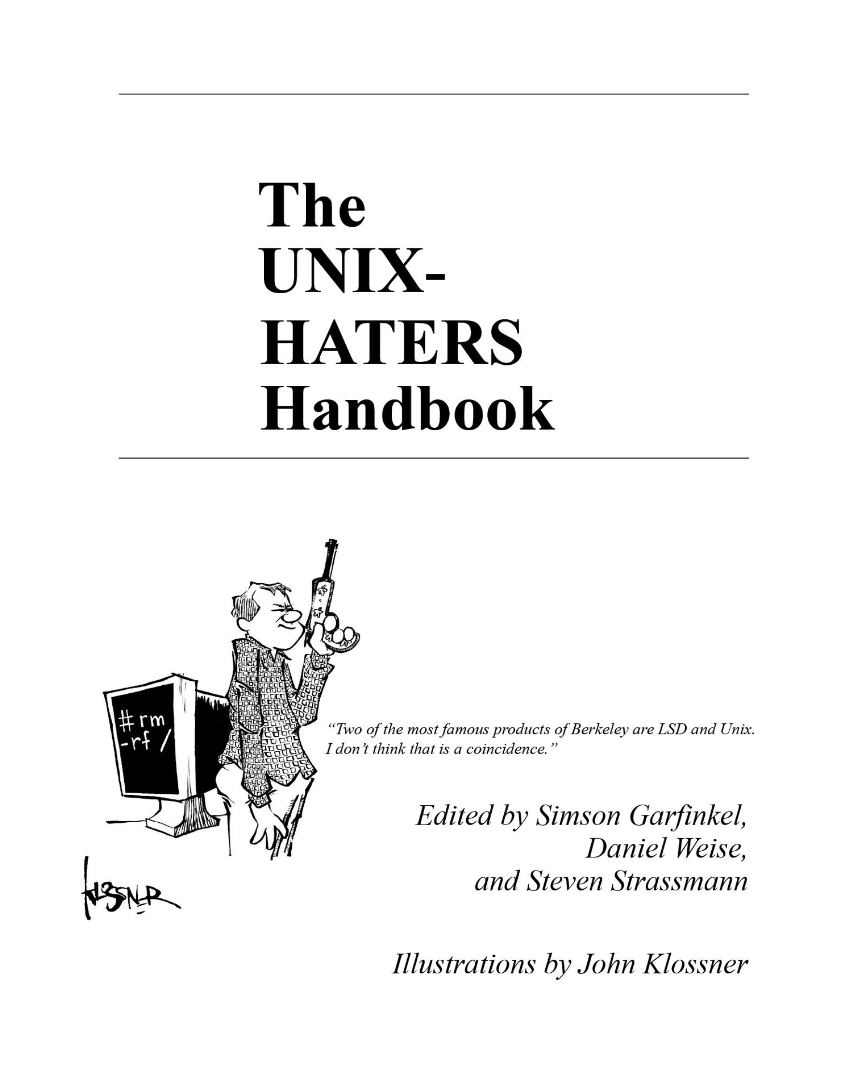 See? Can you imagine such hate for a thing that a hater’s handbook is published… and is successful! Much of this was written for a time when proprietary operating systems were providing a sort of polish that free and open source software could not yet provide. In fact, it wasn’t even clear yet when this was published that Unix was free and open source. The only fact that was true was that Unix was a fact of life that wasn’t going away. There had to be acceptence whether you liked it or not, hahaha!

And that was 1994 when it was first published. It seems so recent for an operating system that was developed over thirty-years prior. The virus took 34-years to spread so effectively that cartoon-drawing Luddites felt so compelled as to speak out against it. If it was already too late by that time and Apple jumped on the bandwagon in 2007 (13 years later) and then Microsoft jumped on the *nix bandwagon in 2022 (an additional 15 years after Apple, 27 years after the Unix Haters Handbook and 51 years after the invention of Unix itself), can you imagine how far behind you are today?

And no I am not a pathological narcissist trying to set myself apart and above from everyone else by seeing this and reading spirituality into the fact I was born the same year as Unix, 50 miles away and got sucked into the Unix-like Commodore Amiga gravity-well, also 50-miles away from me during the 1980s when I was at my most impressionable to such things… Amiga computer… Atari 2600… which was in my house in the 1970s.

I am the baker of goods.

I am not the maker of baking goods. Those are the wizards I enumerated above.

I am not saying I am better than anyone else.

I am saying I am slow on the uptake and that it took me 40-years to get it through my think skill.

I was on a TRS-80 at Camp Watonka near lake Wallenpaupack, 50-miles from where I now currently live as a result of the pandemic of 2020. I rejected computer sciency type things when I was there the first time, in favor of hand magic, Dungeons & Dragons, SciFi, comic books and art, but have been forced to “come back home” (such as it were) from New York City at least for a little while.

Magic Is Real. Magic Is *Nix

I now see that:

It took me a long time to realize this.

I am deeply flawed.

I wasted much of my youth on things that could have made me Bill Gates, Elon Musk, Michael Rubin 1000x over.

The Journey Is The Reward

But am I sorry? A little bit, sure. But we’re all human. Coveting heroes doesn’t make us pathological narcissists.

It makes us ask ourselves why our life is the way it is.

What is it about us that makes us not those super-achieving people?

Is it circumstances beyond our control, or isn’t it actually really choice.

I love to teach and I’ve got a mic.
I love to talk into the mic.
I’m mic lovin’
So let’s begin.

There we go. Done.

Smile to myself, knowing I’m going to be more effective today because of this.

I need a pure Linux playground

Solaris is a Unix variant better than most Unix & Linux… it’s Sun Microsystems who does everything better than everyone else, including disk formats. LXD uses Solaris’ disk format for containers. 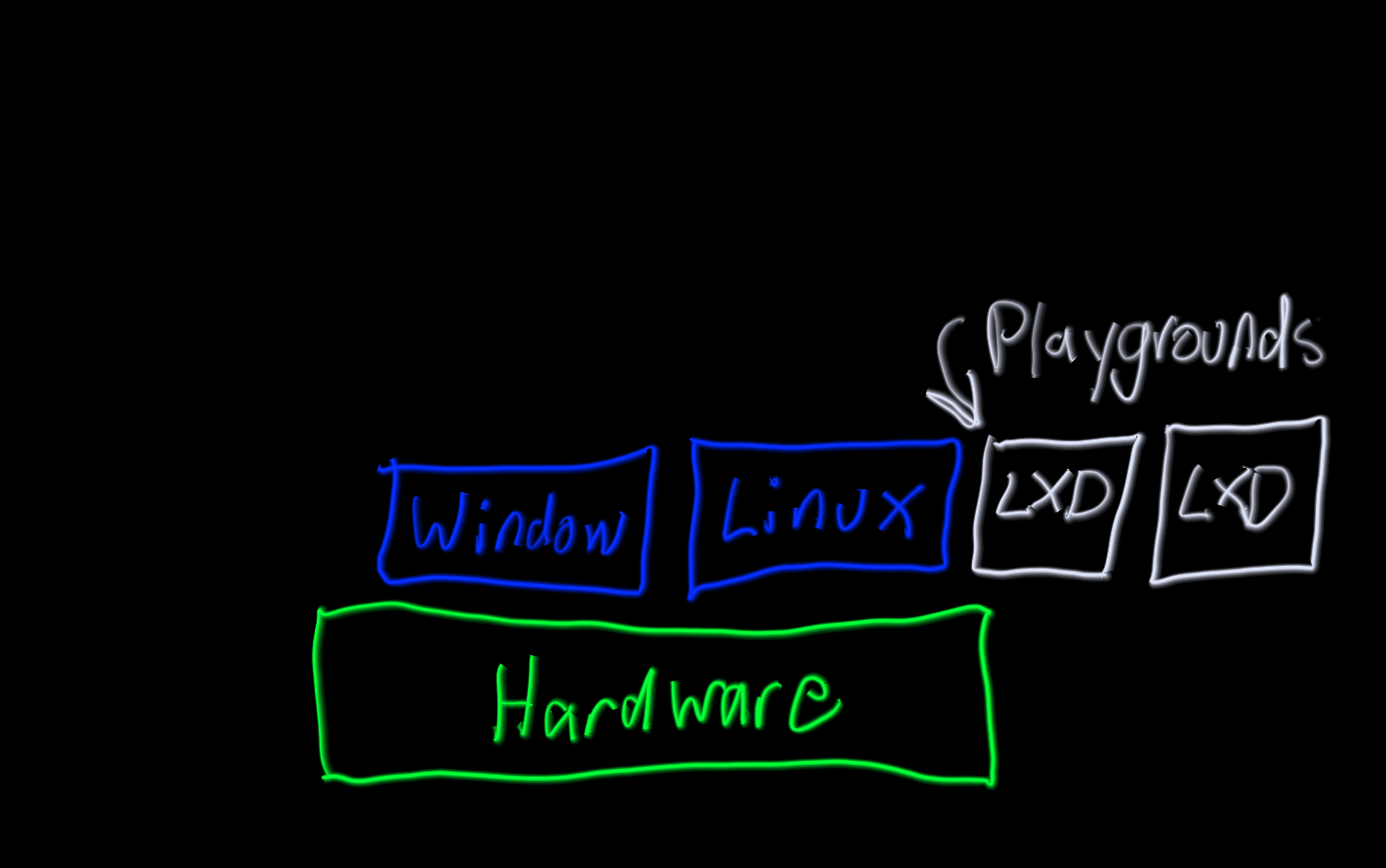 If You Don’t Know *Nix